Shameless Plug - #50Fathers : "We Are Family" by Sister Sledge

Normally, I don't do shameless plugs for people or products other than for myself and the musicians, singers, and song writers I select for this blog in my posts. But..... this time I have to support my family, my peeps, and my cousin!


Independent motion picture studio Triangle Park Entertainment LLC and its Chicago-based production partner, Madwerkz Studios LLC will be conducting select screening of the motion picture, “#50Fathers” in six major markets starting in May. #50Fathers is a dramatic comedy written and directed by Joddy Eric Matthews (Seeing Tomorrow, The Deadly Return Project, The Bubble) and filmed in Northeast Ohio. Triangle Park will premiere the film in Cleveland and follow with releases in Atlanta, Detroit, Washington DC, Memphis and Columbus. Soon #50Fathers will also be made available to viewers around the world through video-on-demand (VOD) on Reelhouse (www.reelhouse.org) and other prominent streaming platforms. {Keep an eye out for news on the official VOD release via the #50Fathers Facebook page and the Reelhouse website.} The official US television trailer for the film debuted on Bounce TV (www.BounceTV.com) in early May. The project is the first urban comedy filmed in 4K or Ultra HD.

The story follows Dominique ‘Nique’ Hathaway, a blue-chip high school athlete (Johnathon L. Jackson) as he prepares to sign a lucrative professional sports contract to play football or baseball. He seemingly has the world at his fingertips except for the one thing he desires most…a father. He and a group of friends launch a social media campaign to attract candidates to serve as a father to his younger brother, Tyree and himself. Fifty prospects will be screened and the one selected will be paid $10,000 per month once Nique signs his pro contract.

“This isn’t a sports film; it’s not about teams, touchdowns or baskets. It’s about what’s really important in life... family,” says Matthews.  “The focus is on the values of fatherhood and the importance of family,” he adds. “We believe the timing is perfect for a film of this nature.”#50Fathers stars Johnathon L. Jackson and Kyle Carthens with Joseph Primes, Mikel Mahoney, Tati Ana, Giovanni Castiglione, Latecia D. Wilson, Sonia Bishop and Denny Castiglione.

How am I connected to this project? Well, my cousin - Chris - is one of the producers! (I'm beaming with cousin pride!) Chris is also the Animation Lead for Madwerkz Studios. I love him and I want to see him and his projects thrive to the moon and back. Plus, with Father's Day fast approaching in the USA, #50Fathers is both timely and relevant. If you can't catch a screening, then check it out on video-on-demand (VOD) on Reelhouse (www.reelhouse.org) when it is available. Well done, Madwerkz Studios, well done!

"We Are Family" by Sister Sledge

One of my favorite songs in honor of one of my favorite people. I love these types of early videos. I especially love seeing how they are just having a good time lip synching and hanging out on the waterfront. Plus, I think I have that same outfit in my closet somewhere. LOL!

"WE ARE FAMILY, get up everybody and sing!" 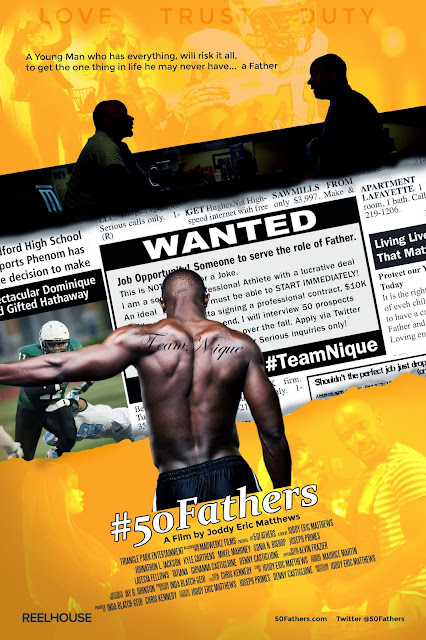 Email ThisBlogThis!Share to TwitterShare to FacebookShare to Pinterest
Labels: 70's, Disco, R and B